The first goal came just two minutes into the game after Toby Williams headed on Dale Hyne’s through ball.   Wiseguys goalkeeper Danny Saunders and Manor forward Scott Arnold collided going for the ball and James King was able to steer it into the net.

Alderney doubled their lead after 12 minutes when Sam Thompson won possession in the centre circle and played a clever ball over the top of the defence for James King to whip a superbly flighted effort over Danny Saunders from 20 yards out.

James King completed his hat-trick four minutes later when Alderney broke over the half way line with a neat exchange of passes involving Scott Arnold, King, and Sam Thompson resulting in King slotting the ball into the far corner of the net from 20 yards.

Wiseguys managed to pull one back just before the interval when Ollie Bolton attacked down the left and the ball came inside to James Morris.   His attempted shot was adjudged to have struck Will Robinson’s hand and Tyrone Carkeet calmly despatched the resultant penalty

It was a much more determined Wiseguys side who came out for the second half although King looked set to restore Alderney’s three goal advantage in the 48th minute when he was put through on the left but Danny Saunders managed to get his effort round the post for a corner.

Alderney went close again a minute later when Aaron Carrivick drove the ball in from left but Liam Meldrum was unable to get it on target then Wiseguys went straight down the other end in the 50th minute and pulled anther goal back through James Morris.   John Taylor brought the ball out of defence and slipped it wide to Adam Louka whose diagonal crossfield ball found Ollie Bolton.  Bolton exchanged passes just outside the penalty area with Morris who slotted it clinically inside the far post.

James King laid the ball off for Scott Arnold to fire in a low shot in the 53rd minutes but Danny Saunders managed to divert it against the post and round for a corner.

James Morris took the ball into the Alderney penalty area in the 72nd minute and went down under a challenge from Dale Hyne.   Wiseguys were awarded their second penalty of the game and Tyrone Carkeet made no mistake with the spot kick to put them on terms.

Morris managed to slip the ball past Alderney keeper Chris Johnson in stoppage time but it was going just wide of far post when it was cleared by a defender.

Extra time failed to produce a decisive goal although good work by James King In the last minute resulted in the ball being played back to Ryan Marshall whose effort just cleared the angle of post and bar.

Unfortunately for Alderney, two of their efforts in the penalty shoot out came back off the crossbar while Wiseguys were unerring with their four attempts.  Inevitably it was Tyrone Carkeet who scored the decisive penalty.

Alderney Manor’s James King was chosen for the Man of the match award by BHFL President Mike Fowler. 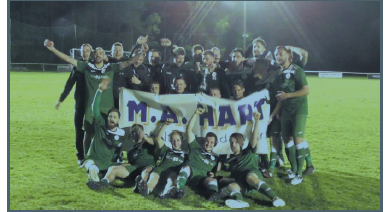 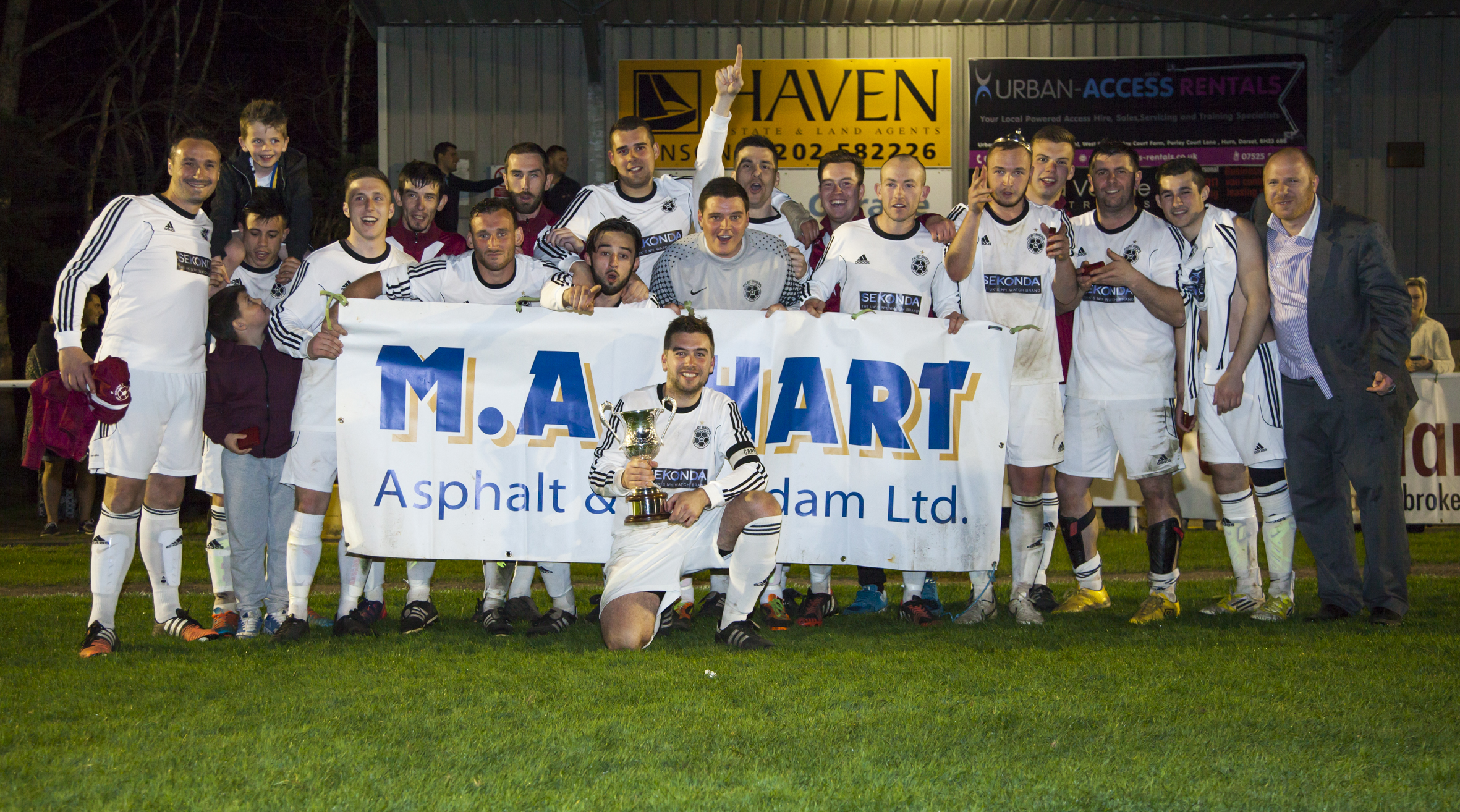 Kinson goalkeeper Arron Wyeth kept his team in the game with a succession of excellent saves but, ironically, it was he who sent Bradley Aspin tumbling for the penalty that was to decide the issue.

Rangers ‘keeper Owen Farnes had to be off his line quickly to deny Trevor Fisher in the 17th minute after John Watt had caught Jason Lock in possession.

Arron Wyeth did well to block a low drive at the other end from Brad Aspin who whipped the rebound just over the bar from close range.

Rangers were at full stretch defending a Kinson free kick while, as the first half came to a close, Mark Pudney and Mark Rourke combined brilliantly to create an opportunity at the other end for Brad Aspin who was, once again, thwarted by Arron Wyeth.

Pudney put Rourke through at the start of the second half but Wyeth and his defenders reacted quickly to snuff out the danger.

Wyeth produced a magnificent save in the 57th minute to turn Brad Aspin’s close range header round the post and, after Rangers had taken the lead with their penalty ten minutes later, Wyeth did well to divert a fierce Marcus Cullen effort onto the crossbar and behind for a corner.

Kinson skipper Jamie Lever’s shot from outside the box was narrowly wide in the 84th minute while, at the other end, Wyeth pulled off another excellent save.

Kinson Con goalkeeper Arron Wyeth was chosen for the Man of the Match award by BDFA President Mike Fowler.

Click here for more pictures, of the M. A. Hart In-Excess Cup Final, from Steve Harris 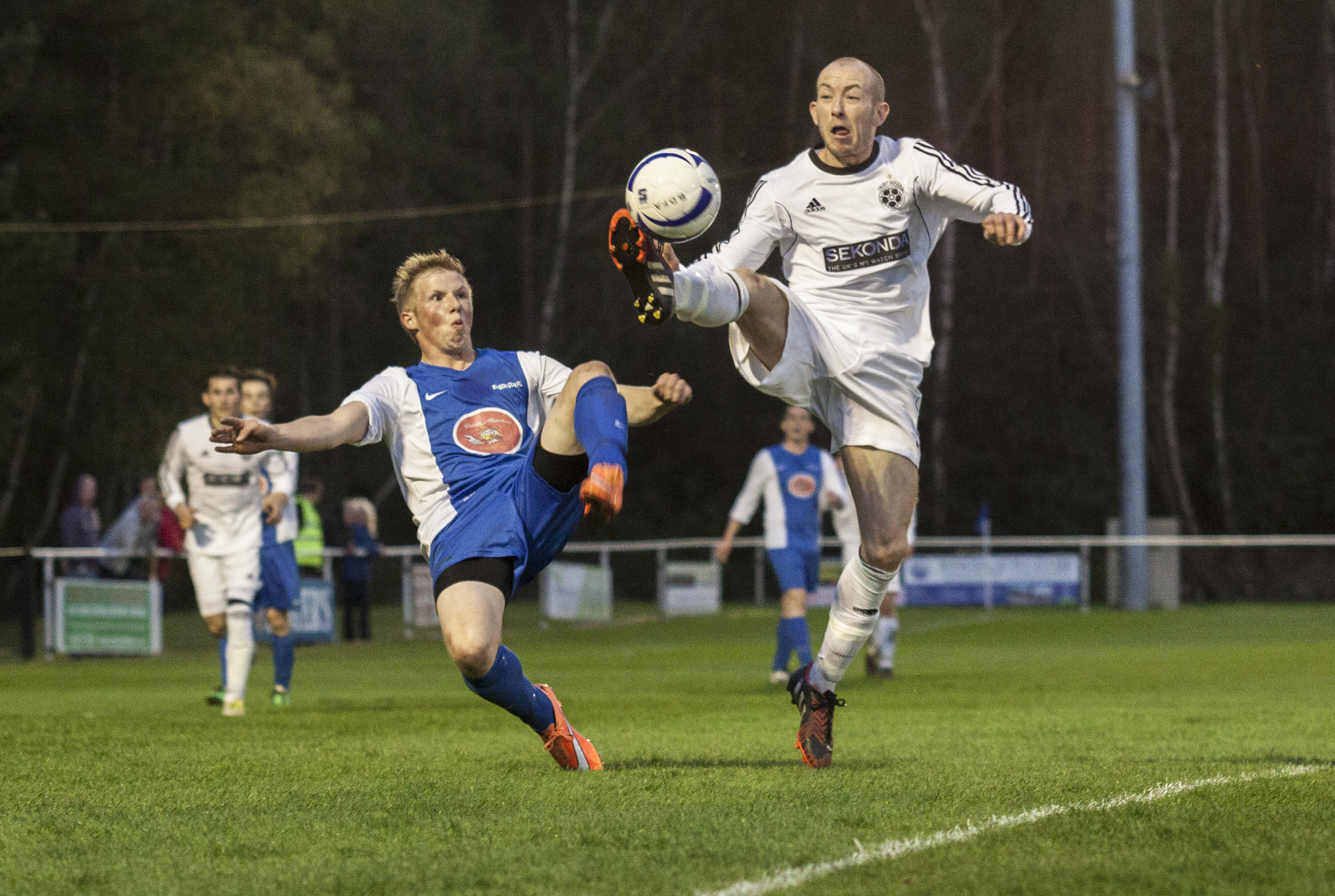