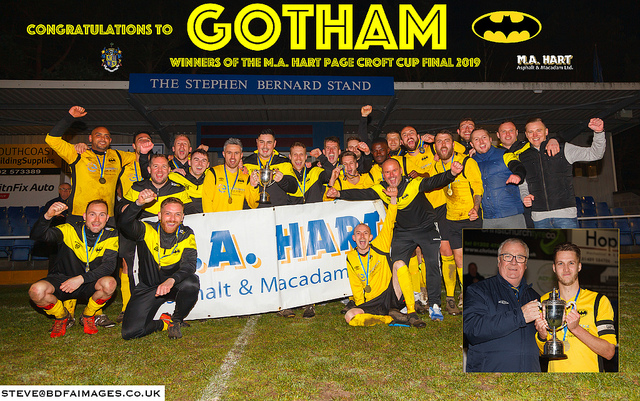 There was late drama in the M.A. HART PAGE CROFT CUP FINAL when Gotham substitute Joe Sullivan drilled home a twenty yard free kick with just two minutes of extra time remaining to clinch a 2-1 victory over Queens Park Athletic in a bruising, hard fought game at Hurn Bridge.
Gotham had a lucky escape in the first period of extra time though when Park’s leading marksman Martin Smith put his penalty kick over the bar.
Gotham were into their stride quickly from the start, dominating the early exchanges with Queens Park not allowed to settle.
Lee Pearson combined well with Ryan Ashford midway through the first half to create an opening but the advancing QPA goalkeeper Harry Shaw spread himself well to divert Pearson’s shot for a corner.
Gotham took the lead in the 29th minute when the ball was played behind the defence for Adam Louka to clip it over Shaw and into the back of the net.
Parks’s Tom Pepper made a good run down the left ten minutes before the interval to set up
Dean Mellor but Gotham defender Paul Blenman managed to make a timely challenge.
Mike Wheeler was fouled by Ashford outside the Gotham penalty area in the 40th minute
and Dean Mellor equalised for QPA with a dipping free kick which escaped goalkeeper Ben
Hatch’s grasp and rolled into the net.
The second half began with Louka slipped the ball back to Sheridan on the edge of the QPA
box and the Gotham skipper’s low shot brought an excellent diving save from Shaw.
Queens Park then began to look the more threatening they went close on several
occasions.
Mellor’s curling free kick from just inside Gotham half in the 63rd minute found Wheeler
running in but Ben Hatch was perfectly position to save.
Then Pepper’s low cross from the left found Martin Smith but Gotham defender Mike
Barber’s perfectly timed challenge sent the ball up and over the bar.
Pepper gave his man the slip in the 72nd minute to get in a superb cross from the right.
Smith met it with a header which was pushed away by Hatch with Smith just unable to
convert the rebound.
QPA were reduced to ten men when Mike Wheeler was shown a second yellow card in the
80th minute after being adjudged to have fouled Sheridan. They continued to press though
and Barber had to make two blocks in quick succession, first from Lloyd Pearce and then
from Mellor.
With the first period of extra time coming to a close, Queens Park front man Lloyd Pearce
raced away down the right and was brought down in the box by Paul Blenman. Referee
Chris Sheppard had no hesitation in awarding a penalty but Martin Smith put the spot kick
over the bar.
Gotham skipper Shane Sheridan saw red ten minutes from the end of extra time when, after
squeezing between Smith and Doe, he lunged into a challenge on Harry Shaw who had dived
on the ball.
Just when it looked as if the game would have to be decided on penalties, JJ Rayner was
penalised for a challenge just outside the QPA penalty area. As Joe Sullivan stepped up to
take the free kick, Gotham substitute Jacob Lawrence shunted the defensive wall sideways
to create a gap. Shaw managed to get his hands to the free kick but was unable to keep it
out.
Queens Park Athletic centre forward Tom Pepper was chosen for the Man of the Match
award by BHFL President & Chairman Mike Fowler. 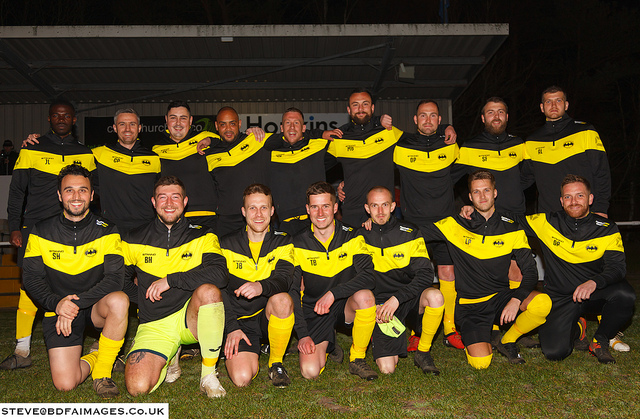 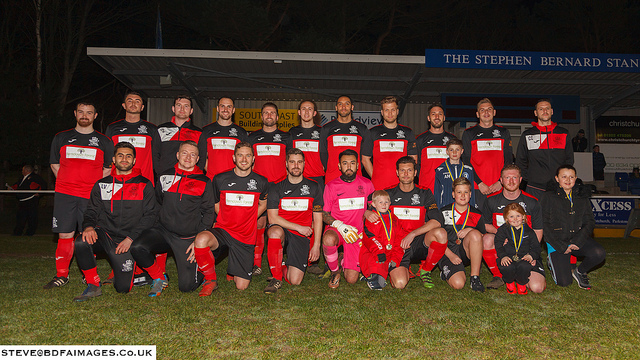 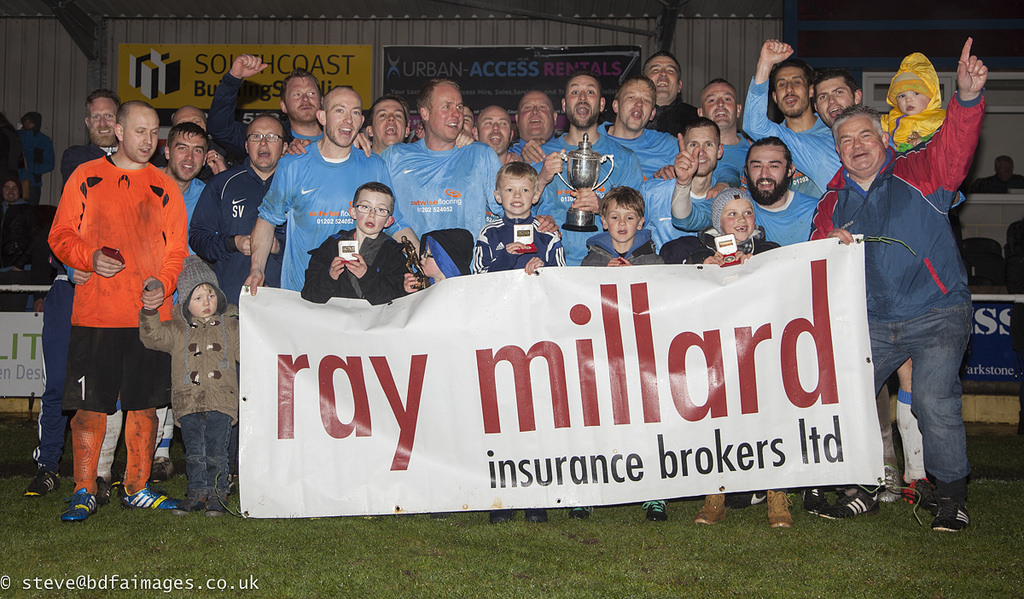 Bisterne had the early chances but it was their Hayward Saturday Division Three rivals who took the lead against the run of play after 18 minutes. Bisterne defender Ben Tucker was pressured into passing back to his goalkeeper but the ball took a bobble as Russell Goodman went to kick it and ended up in the back of the net.

Alderholt’s Dan Oakley was carried off on a stretcher after 25 minutes and taken to hospital with a suspected fractured leg following a challenge with United’s Alec Moorman.

Jamie Wood doubled Alderholt’s lead six minutes into the second half when he ran onto a through ball and steered it past the advancing Goodman.

The introduction of substitutes Charlie Heggan and Sam Hills tipped the balance of play in Bisterne’s favour and they pulled one back on the hour with a Darren Mein penalty after Lascelles Richardson was brought down by Alderholt goalkeeper Jonny Cook.

Cook was relieved to see a long range effort from Richardson rebound from the post two minutes later and the Alderholt goal seemed to have a charmed life in the 77th minute when Bisterne were awarded another penalty after Dave Lock had been brought down and Mein’s spot kick also struck the post.

Bisterne continued to press and, in the last minute of time added on, the Alderholt defence was breached with Nick Howes managing to force home an equaliser from close range.

Alderholt produced a promising move down the right eight minutes into extra time which resulted in a first time effort from Wood that Goodman did well to keep out.

Bisterne’s Dave Lock had a header from a corner well saved by Cook in the second period of extra time and the Alderholt goalkeeper was then replaced two minutes from time by substitute goalkeeper Luke Davis for the penalty shoot out.

Alderholt almost snatched a winner in stoppage time but Graham Cash’s header from a corner was cleared off line.

At 2-2 after extra time, the game was decided on penalties in a nail biting shoot out which even involved the respective goalkeepers successfully slotting one past their opposite number. The deadlock was finally broken with each team having taken twelve spot kicks when Dave Lock made it 9-8 in Bisterne’s favour.

Bisterne United’s Charlie Heggan was chosen for the Man of the Match award by BFA President Mike Fowler.

CLICK LINK BELOW FOR VIDEO HIGHLIGHTS FROM SOUTH COAST JOURNALISM 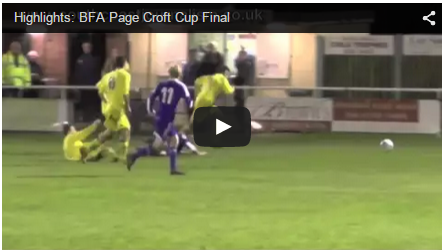