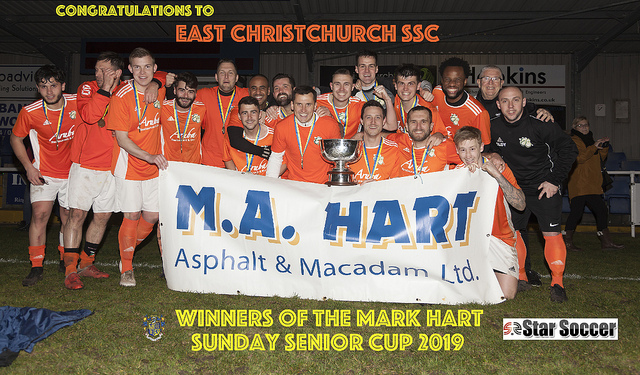 East Christchurch SSC lifted the MARK HART SUNDAY SENIOR CUP for the first time in their history when they emerged 3-1 winners in Thursday night’s final against Division One rivals Talbot Rise at Hurn Bridge.

The main talking point for those in attendance will undoubtedly have been the ugly fracas midway through the first half that resulted in Talbot Rangers having to play the remaining 70 minutes with nine men after having two players sent off.

Without taking anything away from East Christchurch, the remaining nine Talbot Rangers players and four substitutes deserve a lot of credit for staying competitive right to the end.

Rangers started brightly but it was East Christchurch who opened the scoring when Jack Smith crossed from the left in the 12th minute and Alex Whitehouse whipped it past the ‘keeper from the edge of the penalty area.

East Christchurch went close again three minutes later with Darren Orchard sending a corner kick over from the right and Jamie Trimble climbed above everyone in the middle of the goalmouth to send a header just over Rangers bar.

Then it was Rangers’ turn to threaten with Falco hitting a rising effort in a crowded penalty area which just cleared the crossbar and Rangers continued to press with their skipper only just off target with a 21st minute header.

Tempers boiled over near half way line in the 25th minute after a challenge by Darren Orchard on Mickey Finch and an unsightly melee involving several players from both sides ensued which resulted in Finch and Steve Flynn both being sent off.

East Christchurch right back Harry Smith put a great diagonal ball into the Rangers penalty area in the 29th minute and Jamie Trimble climbed above the defenders to put a header just over the bar.

Another excellent delivery from the right by Harry Smith five minutes before the interval was met at the far post by Dan Hancock. His header looked to have beaten Nathan Clarke in the Rangers goal but Matty Ings managed to head it off the line and over the bar for corner.

East Christchurch skipper Sam Kennedy’s effort from the edge of the box threatened to dip under the bar a minute later but Nathan Clarke denied him with a great one handed save.

Alex Whitehouse put Dan Hancock through ten minutes into the second half but Nathan Clarke came out quickly to save at the East Christchurch central defender’s feet.

Rangers were rewarded for their valiant efforts in the 61st minute when central defender Jake Younger came up for a corner and got above the East Christchurch defence to head the equaliser.

They were only level for four minutes though before Jamie Trimble restored East Christchurch lead with an almost identical goal at the other end.

Trimble then turned provider when his defence splitting pass put Mal Thomas clear in the 73rd minute and the East Christchurch front man neatly slotted the ball just inside the far post to put them 3-1 ahead.

East Christchurch substitute Tom Harris drilled a low shot through a crowded penalty area three minutes from time but Nathan Clarke got down well to pull off an excellent save. 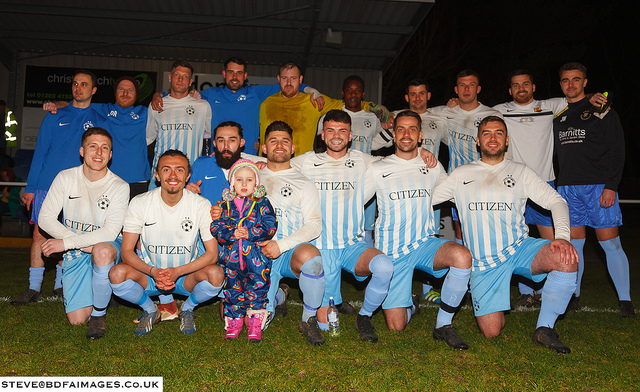