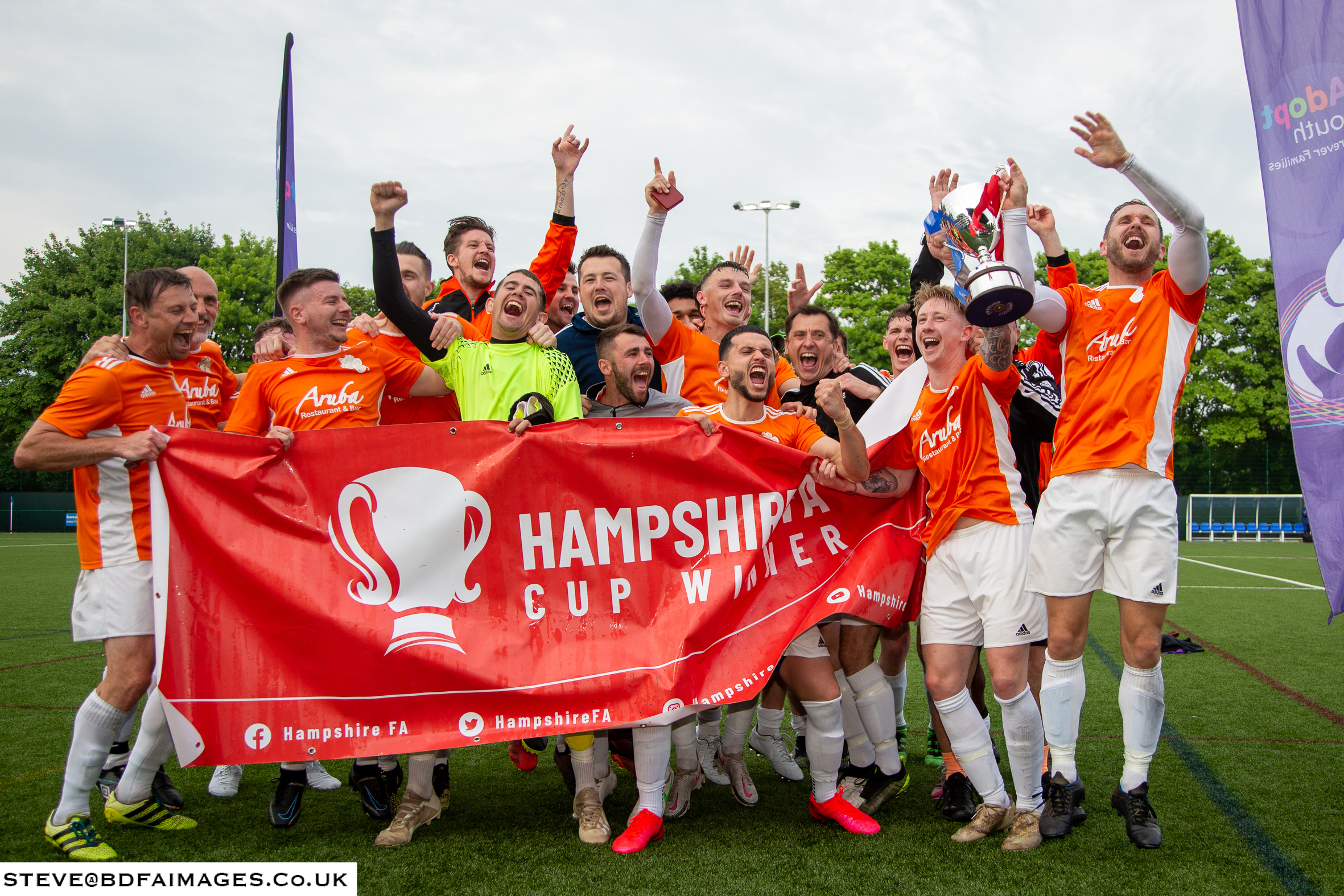 After being losing finalists in the competition by the narrowest of margins in 2009 and again in 2014, it was third time lucky for East Christchurch SSC when they were convincing 4-0 winners against Aldershot & Camberley Sunday League champions Hawley in the JOHN WARD HAMPSHIRE SUNDAY SENIOR CUP FINAL at Basingstoke.

East Christchurch were quickly into their stride and by midway through the first half they had Hawley reeling as they built a commanding three goal lead.

Alex Whitehouse capitalised on a defensive mix up in the 12th minute to race through on the right to put in a low cross which was swept home by DAN HANCOCK.

Alex Whitehouse went on a brilliant run down the right after 19 minutes, leaving a trail of Hawley defenders in his wake, before Elliot Hartnell-Baker met his cross with a first time effort which struck the woodwork.   The ball rebounded to Levi Ridealgh on the left who played it back in for ELLIOT HARTNELL-BAKER who found the target this time to double East Christchurch’s lead.

It was to be virtually Elliot Hartnell-Baker’s last involvement before he was injured and had to be replaced in the 23rd minute by ALEX HANCOCK and the East Christchurch substitute took only three minutes to make an impression, heading home a superb cross from out on the left by full back Andrei Munteanu.

East Christchurch were forced to make another change in the 34th minute when Jamie Trimble was injured and had to be replaced by Darren Orchard.

Hawley had an opportunity to get back into the game in the 35th minute when Dan Whitehouse was penalised for a challenge on the edge of the penalty area but Jacob Smith’s resultant free kick hit the post.

Hawley’s Nathan Connolly was put through in the 39th minute but East Christchurch ‘keeper Dan Sansom had narrowed the angle well and was able to block the shot.

With half time approaching, East Christchurch right back Jordi Gentle played another good ball down the line to Alex Whitehouse who got behind the Hawley defence once again and had to be brought down just outside the penalty area.     Levi Ridealgh took the free kick, driving it low into the crowded penalty area where it struck a defender and went behind for a corner.

Luke Edmundson and Harry Bowman both went close for Hawley after the interval from outside the penalty area before Dan Brown had the Hawley ‘keeper at full stretch with a lob in the 66th minute following Alex Hancock’s cross from the right.

East Christchurch killed the game off with a fourth goal in the 75th minute.   Levi Ridealgh broke away over the half way line to put Alex Whitehouse through on the left and he threaded the ball through the advancing ‘keeper’s legs. The ball came back off the post in the ensuing goalmouth scramble and ALEX WHITEHOUSE was on hand to steer it into the net.

Another excellent move by East Christchurch four minutes later resulted in Alex Hancock finding Alex Whitehouse with a cross from the right but the striker’s shot across the face of the goal went just wide of the far post.

East Christchurch made their final substitution in the 85th minute when Gavin Haynes made way for Morgen Waugh.

It was a magnificent performance from East Christchurch with their excellent blend of youth and experience and it was no surprise that Alex Whitehouse was the sponsor’s choice as Man of the Match after having had a hand in three of the goals. 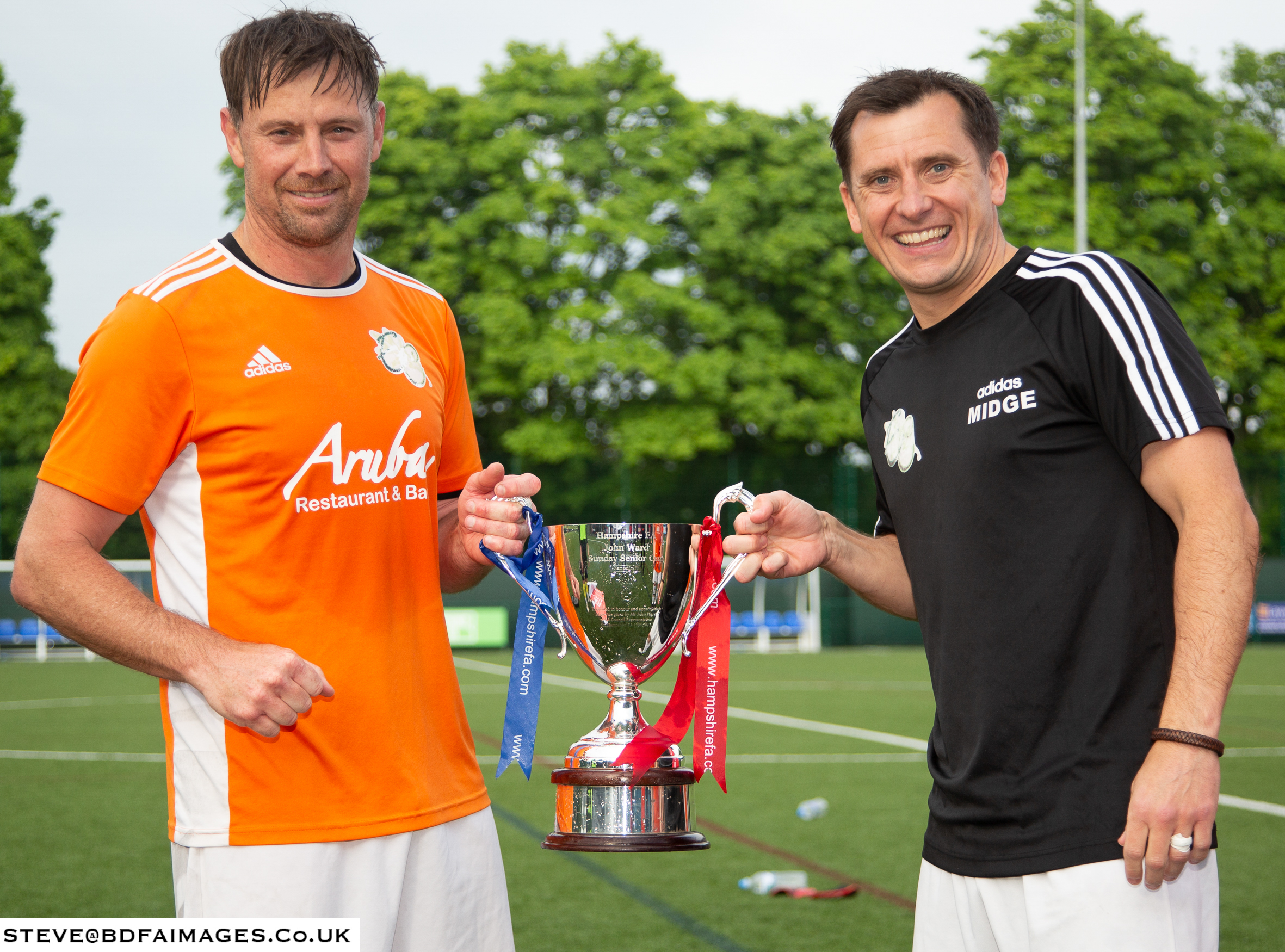 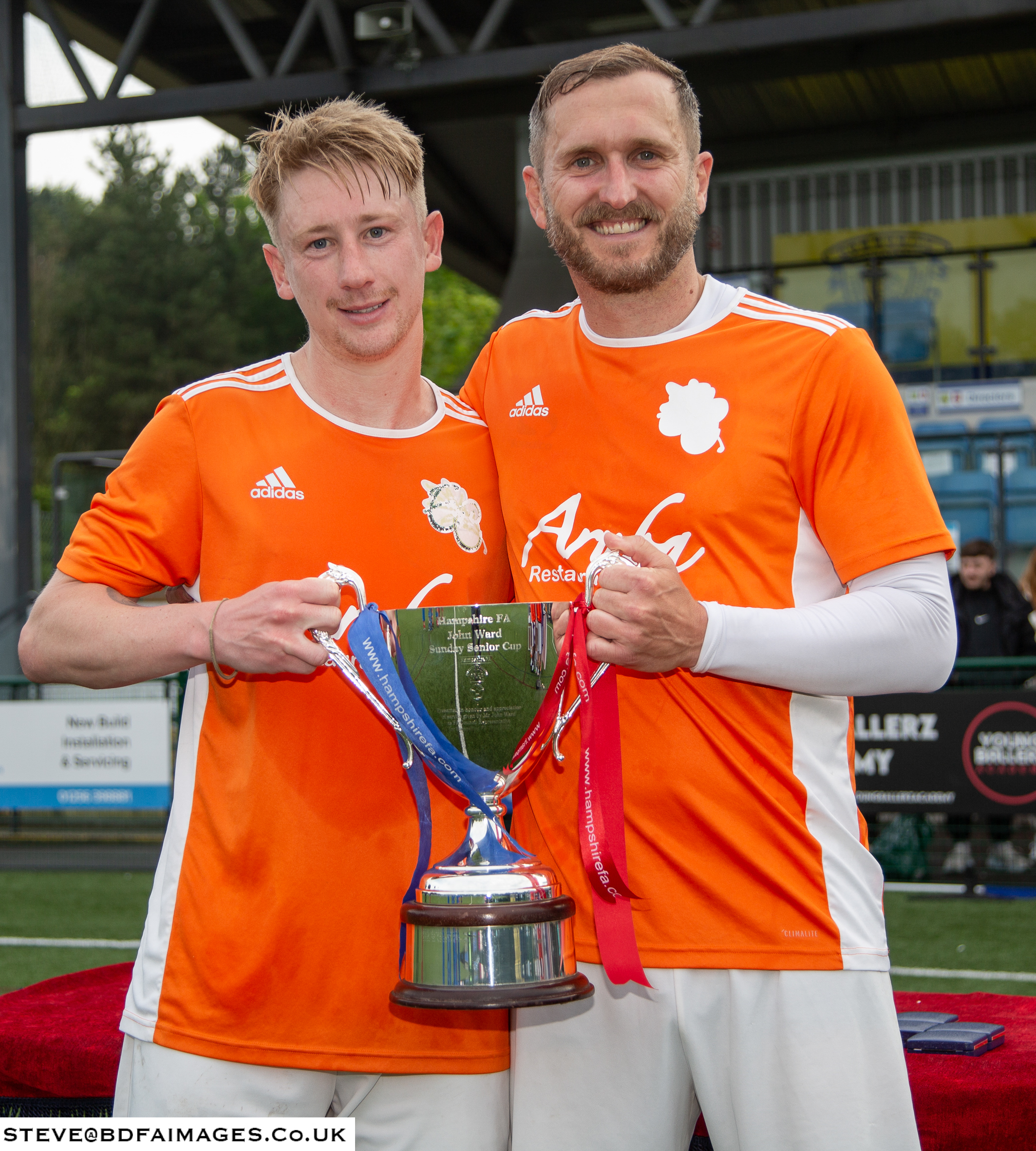 All Photos can be found on our facebook page by following this link: https://www.facebook.com/BournemouthHaywardFootballLeague/